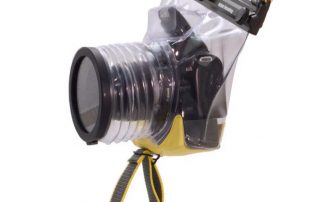 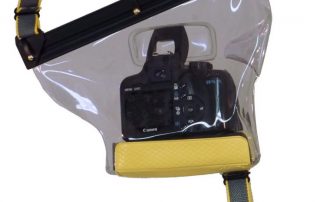 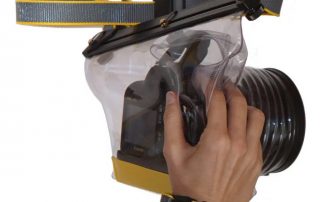 The U-A100 SLR underwater housing makes it easy to operate the camera as its various components and buttons can be operated through the PVC.

The U-A100 is designed to fit almost all common SLR cameras on the market today, irrespective of the manufacturer or model. With this housing, you can take the camera safely up to a depth of 20 m / 60 ft.

U-A100 is shipped with the new ewa-marine safety-wrist-strap. Simply slip your hand through the loop at the bottom and, if the camera accidentally falls out of your hand, the loop automatically locks and secures the underwater case to your wrist. And yet it is easy and quick to open, when required, with the integrated buckle.

If the optional BF1 lead weight is inserted into the housing, underneath the camera, it becomes even easier to reach the maximum depth. Experienced photographers have confirmed, that the auto focus and flash both continue to function perfectly. As you descend, the air is pressed into the camera. Due to this, the pressure inside the housing will remain the same as the surrounding water pressure; ewa-marine assures implosions are impossible. Due to this, we have to start the dive with a suitable amount of air inside the housing. The foam pads supplied with the housing are part of this air “reservoir” and additional air should also be blown into the housing, via the valve at the rear, to ensure that the maximum potential volume is being utilized.

Designed specifically for consumer style digital dSLR, large mirrorless system-camera as well as the “old style” analog 35mm SLR cameras, the ewa-marine U-A100 underwater housing is manufactured from double laminated PVC and has an integrated, optically neutral flat glass as a front port. With this housing you will receive an 82mm filter adapter and a RA77-82 step-up ring. By means of thess adapters the camera is then docked into the housings front port (which is bigger on this housing then on the standard U-A), ensuring that the lens remains parallel and centered behind the front of the lens. Just as if it were a clear, neutral optical filter.

As many cameras in this category have a built in, pop-up flash we have added a “roof” to accommodate it in the housing. To fix the right hand near the shutter release, the housing has an adjustable wrist strap and a “Finger” to position the index finger right on the trigger.

The housing comes with a foam padding that fits underneath the camera, inside the housing. This sponge has to be removed if you want to use your camera with a battery grip, or to make space for the tripod connector that is available as an optional extra. (Please keep in mind that, as a result, cameras like the Nikon D4 or Canon 1DX, that basically include a fixed “battery grip” as part of their design, can not be used inside the housing that has been fitted with a tripod connector.)

It has a pair of non-corrosive and seawater resistant clamping rails which fit together for perfect sealing. They tighten by means of three screw knobs. There is also the practical, adjustable carry strap on the clamping rail.